UPDATED PICS and VIDEO NEAR BOTTOM.

NOTE: The application rate using this method is WELL BELOW the labeled recommended usage. The area treated was approximately 1000 sq feet. The label says 3.75 ounces per 1000 sq feet, if using a hose end sprayer. Doing this method, we used less than one ounce to treat the nutsedge.

NUTSEDGE: It’s a weed that just won’t go away easy. Nutsedge is a tough weed to kill due to the “nuts” often being deep and many.  In this video Doc shows you how to kill nutsedge in the heat of the summer without killing your Bermuda lawn. NOTE: We forgot to mention that you SHOULD water it in the next day.

You can click the products below to see them on Amazon.

If you want a hose end bottle for large areas.

About 10 days later many… not all… are turning yellow. 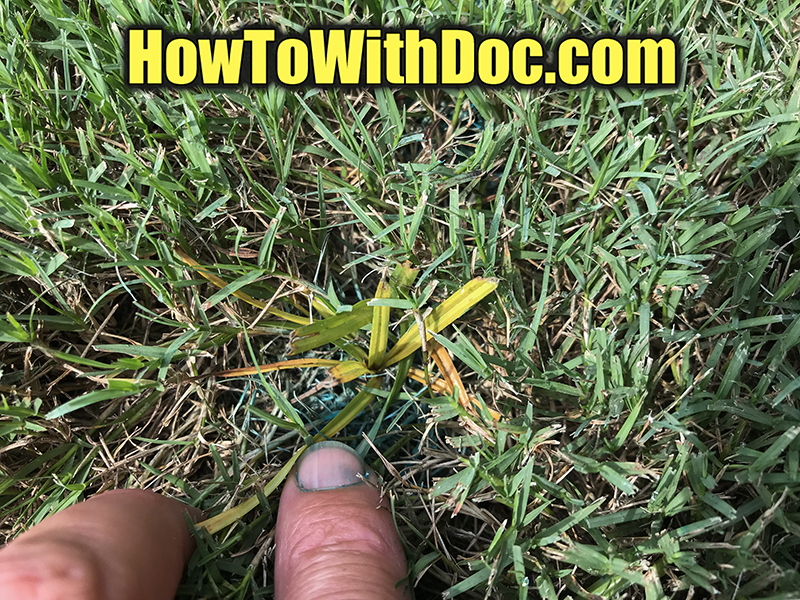 Cyperus esculentus (also called chufa sedge, nut grass, yellow nutsedge, tiger nut sedge, or earth almond) is a crop of the sedge family widespread across much of the world. Cyperus esculentus can be found wild, as a weed, or as a crop. Evidence exists for its cultivation in Egypt since the sixth millennium BC, and for several centuries in Southern Europe. In Spain  esculentus is cultivated for its edible tubers, called earth almonds or tiger nuts, for the preparation of horchata de chufa, a sweet, milk-like beverage. However, in most other countries, esculentus is considered a weed.

esculentus is an annual or perennial plant, growing to 90 cm (3.0 ft) tall, with solitary stems growing from a tuber. The plant is reproduced by seeds, creeping rhizomes, and tubers.[12] Due to its clonal nature, C. esculentus can take advantage of soil disturbances caused by anthropogenic or natural forces. The stems are triangular in section and bear slender leaves 3–10 mm (1/8 to 1/2 inches) wide. The spikelets of the plant are distinctive, with a cluster of flat, oval seeds surrounded by four hanging, leaf-like bracts positioned 90 degrees from each other. They are 5 to 30 mm (about 3/8 to 1 1/8 inches) long and linear to narrowly elliptic with pointed tips and 8 to 35 florets. The color varies from straw-colored to gold-brown. They can produce up to 2420 seeds per plant. The plant foliage is very tough and fibrous and is often mistaken for a grass. The roots are an extensive and complex system of fine, fibrous roots and scaly rhizomes with small, hard, spherical tubers and basal bulbs attached. The tubers are 0.3 – 1.9 cm (1/8 to 3/4 inches) in diameter and the colors vary between yellow, brown, and black. One plant can produce several hundred to several thousand tubers during a single growing season. With cool temperatures, the foliage, roots, rhizomes, and basal bulbs die, but the tubers survive and resprout the following spring when soil temperatures remain above 6 °C (43 °F). They can resprout up to several years later.[16] When the tubers germinate, many rhizomes are initiated and end in a basal bulb near the soil surface. These basal bulbs initiate the stems and leaves above ground, and fibrous roots underground.

How to Kill Nutsedge

Kill Nutsedge in Lawn Nutsedge is a really tough lawn weed, but Doc shows you how to kill nutsedge in your lawn. Video Nutsedge Killers ← The Dismiss Doc uses. Click to see on Amazon […]