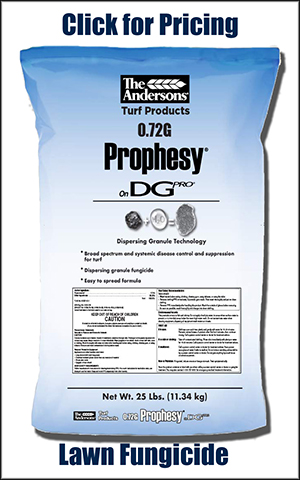 Broad spectrum and systemic disease control and suppression for turf

Use this product in a preventative disease control programDG Pro formulation allows for more particles per square inch.

Easy to spread formula with Dispersing Granual Technology, allows for more particles per square inch of the product – leads to better control of Fungicide

Within 2-4 weeks you will see the fungus go away and thick green grass appear.

According to the Penn State’s College of Agricultural Science, removing dew water that collects on the grass leaves each morning has proven effective as an aid in reducing brown patch. This removal can be achieved by mowing or by dragging a water hose across the area.

Rhizoctonia can affect all cool-season lawn grasses, but it is especially harmful to ryegrass and tall fescue. Kentucky bluegrass and fine fescues can occasionally be affected, but the damage is usually minimal in these species. Brown patch can also affect a variety of warm-season grasses, including St. Augustine grass and zoysiagrass. ​

Brown patch is a foliar disease, meaning that it harms the blades of grass but not the crown of the plant or the root system. Grass plants affected by brown patch may recover on their own, without chemical intervention.

Brown patch appears as irregular circular patches in the lawn that are brownish yellow in color and range from 6 inches to several feet in diameter. The affected leaves usually remain upright, and close inspection shows lesions on the leaves that are tan in color and irregular in shape with a dark brown border. White, cottony, mycelium can be found on dew-covered turf in the early part of the morning.

Brown patch is notable for a distinctive “smoke ring” border that is sometimes visible on the outer edge, giving the patch a “frog-eye” appearance. The ring itself is typically 1/4 to 1/2 inch wide and is most visible in the morning. Sometimes grass within the ring is entirely killed, creating a sunken look to the patch, but more often the grass inside the patch simply becomes thinner than the surrounding lawn.

The Rhizoctonia fungus may be present for some time in the soil before it manifests as brown patch disease. The fungus overwinters in the lawn grass or soil beneath in the form of fungal bodies known as sclerotia, and it can survive for years until conditions are right. Rhizoctonia is most likely to cause brown patch during the periods of high temperature and high humidity in mid- to late-summer when night-time temperatures remain above 68 degrees F and daytime temperatures are routinely in the 80s or above. Periods of rainy weather when the air is saturated with moisture also promote the appearance of the disease.

Some of the conditions that are conducive to brown patch are beyond the homeowner’s control. Air temperatures and humidity levels may cause a lawn to develop brown patch no matter what a homeowner does. But you can minimize the chances for a brown patch with a good lawn care regimen.